So I said two posts ago that I would look at presenting a comparison between creating HDR images with LR2/Enfuse and Photomatix Pro. So here are a series of images, all taken on the same day when we visited Punalu’u Black Sand Beach back in January. All images come from 3 bracketted images taken 2 EV apart.

Images on the left are HDR composites using Enfuse, and those on the right are using Photomatix Pro.

I processed each Enfuse and Photomatix HDRs using the same settings. These are quite different programs in execution and so I couldn’t really process the images to the same settings for the two, so I did the next best thing which is to find a setting I was happy with for each program and kept it the same each time. In Photomatix, I used the Details Enhancer rather than the Tone Compressor (which I’ve yet to play with).

In a way, this is also a bit of a hack as (especially given the flexibility that Photomatix Pro offers) when you do this for real each HDR image is processed differently, depending on the scene, lighting, etc. But I wanted to maintain some sort of control in making this quick comparison. 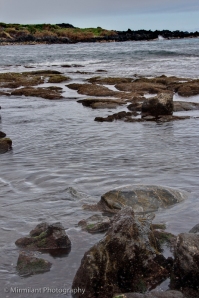 And finally, the images were then re-imported back into Lightroom, but I refrained from doing any post-processing on the images, which one would normally do, as final tweaks to the images. So these images you see here are exactly what you get out of the HDR processing software.

You’ll probably agree that the differences between the two are clear to see. In each of these cases I feel that Photomatix does a better job of rendering more saturated colours (I had the Saturation pumped up to 0.5 instead of the default 0.2  in Enfuse) and producing more interesting lighting, especially with the dark clouds and lava rocks. 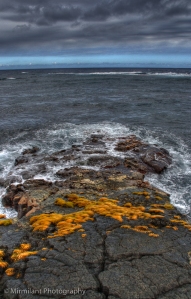 However, there is one aspect which I feel Enfuse won every time. All the images that I took that day were handheld, no tripod. So, inevitably there is some image motion between the three bracketted images. Both Enfuse and Photomatix have options to align images (which were selected each time), but in every case Enfuse does a better job. You can see artifacts introduced by alignment errors in all the Photomatix images above when you look closely, but especially in the one above.

So as a quick comparison, this exercise has shown me that Enfuse can produce more natural HDR effects which is truer to the actual scene at the time you took it. However, Photomatix offers you much more control and flexibility and is able to produce more dramatic images. There is a much larger parameter space to explore with Photomatix Pro and it does offer the ‘natural’ look as well as the real funky/surreal/grunge look. What you do need is patience as  you go exploring in that parameter space

Finally, this image above is not HDR. It is just me playing where I feel most comfortable – in my Lightroom. And it is an image of the real star and excitement of our afternoon at Punalu’u. Personally, I’m extremely excited and happy that the population of Green Sea Turtles (or Honu in Hawaiian), which are found all around the Hawaiian shores, seems to be making a comeback. Punalu’u is one of the honu’s favoured feeding and nesting beaches.

Respect the Honu. Always keep at least 5-10 feet away from them and if you want to take pictures, do so with a long lens.